Why you should not touch anything while diving

You can meet them at many dive sites in Palau, they are cute little fish and come in a variety of colors and body shapes. They move slowly and are a great photo subject. They look harmless, but they know very well how to defend themselves from attackers. Read more about puffer fish in this blog. 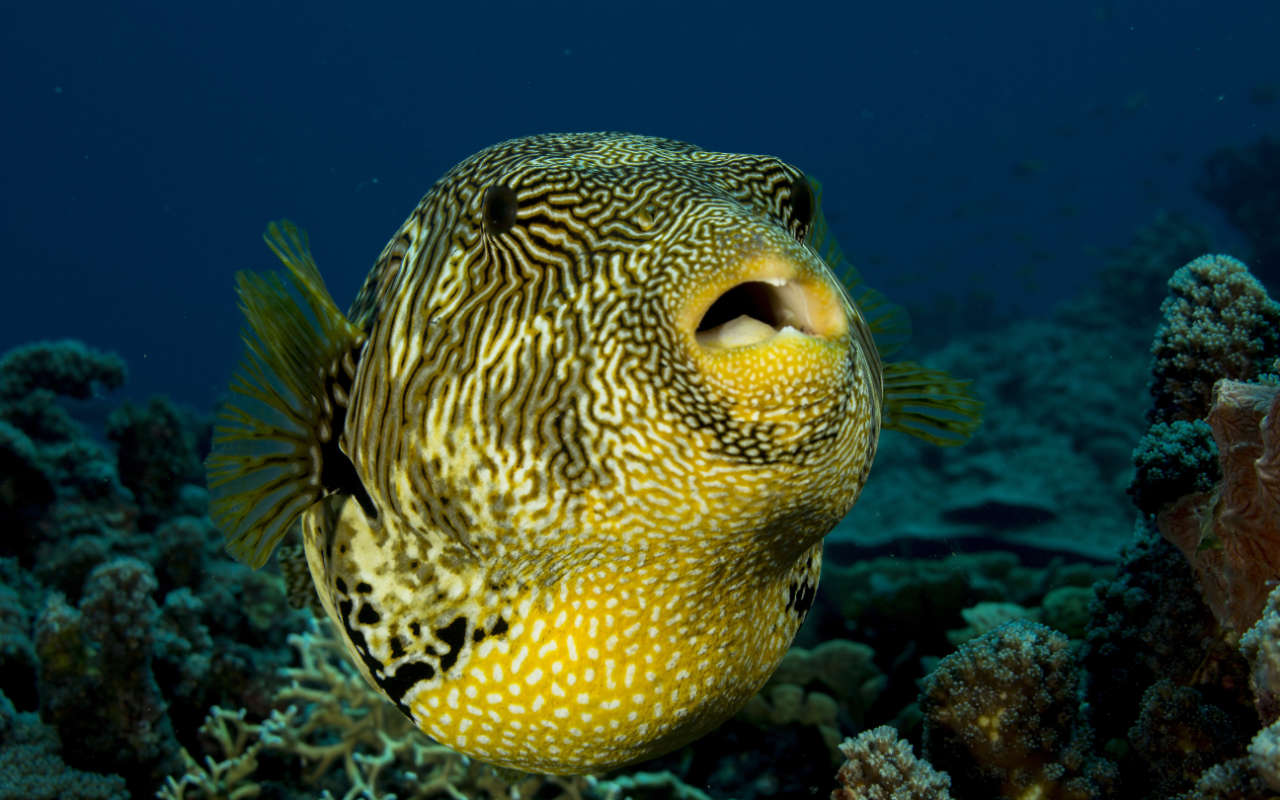 Tetraodontidae is a Tetraodontiformes family of predominantly marine and estuary fish. Pufferfish, puffers, balloonfish, blowfish, blowies, bubblefish, globefish, swellfish, toadfish, toadies, honey toads, sugar toads, and sea squab are all members of the family. They have huge exterior spines and are physically similar to porcupinefish, which are closely related (unlike the thinner, hidden spines of the Tetraodontidae, which are only visible when the fish have puffed up). The scientific name relates to the four massive teeth fused into an upper and lower plate that are used to shatter the hard shells of their natural prey, crustaceans and mollusks.

There are about 120 species of pufferfish in the globe. Although the majority of species live in tropical and subtropical ocean environments, some exist in brackish and even fresh water. Their bodies are long and tapering, with bulbous crowns. Others have more subdued or cryptic coloring to blend in with their surroundings, while some have wild patterning and colors to proclaim their toxicity. They come in a variety of sizes, from the 1-inch dwarf or pygmy puffer to the freshwater giant puffer, which can grow to be over 2 feet long. They lack scales and have rough to spiky skin. They all have four teeth fused together in a beak-like shape.

Invertebrates and algae make up the majority of the pufferfish's food. With their powerful beaks, large specimens will even crack open and devour clams, mussels, and shellfish. Poisonous puffers are thought to make their lethal venom from bacteria found in the animals they eat.

Pollution, habitat loss, and overfishing have made certain pufferfish species vulnerable, but most populations are considered stable.

What are the defenses of this slow fish?

If the pufferfish is successfully pursued, its secondary defense mechanism is to fill its extraordinarily elastic stomach with water (or air when outside the water) until it is considerably larger and practically spherical in appearance. All puffers have pointed spines, even if they aren't visible when the puffer isn't inflated, so a hungry predator may be confronted with an unappealing, pointy ball rather than a slow, easy meal. Predators who ignore this warning (or who are "lucky" enough to catch the puffer unexpectedly, before or during inflation) may die from choking, and predators who do manage to swallow the puffer may find their stomachs full of tetrodotoxin (TTX), rendering puffers an unpleasant, dangerous food source. 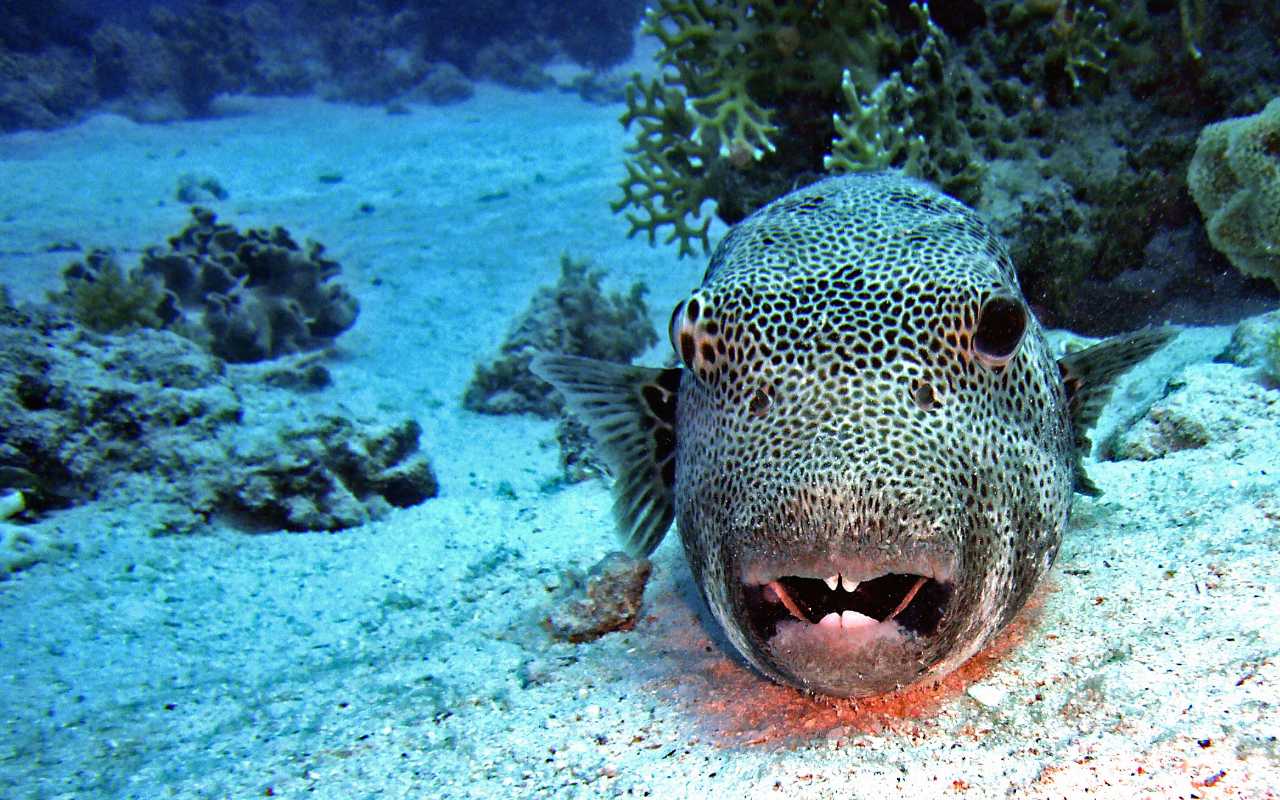 The presence of tetrodotoxin (TTX) on the surface of the skin of larval pufferfish acts as a chemical defense, causing predators to spit them out. Not all puffers are harmful; the northern puffer's flesh is not poisonous (a trace of poison can be discovered in its viscera), and it is considered a delicacy in North America. Takifugu oblongus, for example, is a nonpoisonous fugu puffer, and toxin levels vary widely even among dangerous fish. The neurotoxic produced by puffers is not always as toxic to other creatures as it is to humans, and puffers are regularly consumed by several fish species, such as lizardfish and sharks.

Puffers can autonomously move their eyes, and many species can change the color or intensity of their patterns in reaction to changes in the environment. They are identical to the terrestrial chameleon in several aspects. Despite the fact that most puffers are drab, many have vivid colors and striking markings, and make no effort to hide from predators. This is most certainly a case of openly expressed aposematism.

Dolphins have been seen skilfully handling pufferfish between themselves, seemingly in an attempt to become drunk or enter a trance-like state.

Check out our great discounts for Palau's most luxurious liveaboard the Ocean Hunter Palau!
CHECK IT OUT

Is it safe to touch a pufferfish?

Except you are an absolute expert on the topic puffer fish and know the toxicity of each of them individually you should never touch a pufferfish! The pufferfish's skin is covered in spines and spikes, which are exceedingly hazardous. Carry a toxin called tetrodotoxin (TTX), which is deadly to other fish and humans. You should avoid touching a pufferfish, especially if it is "puffed out." Your hands could be damaged and you could die. 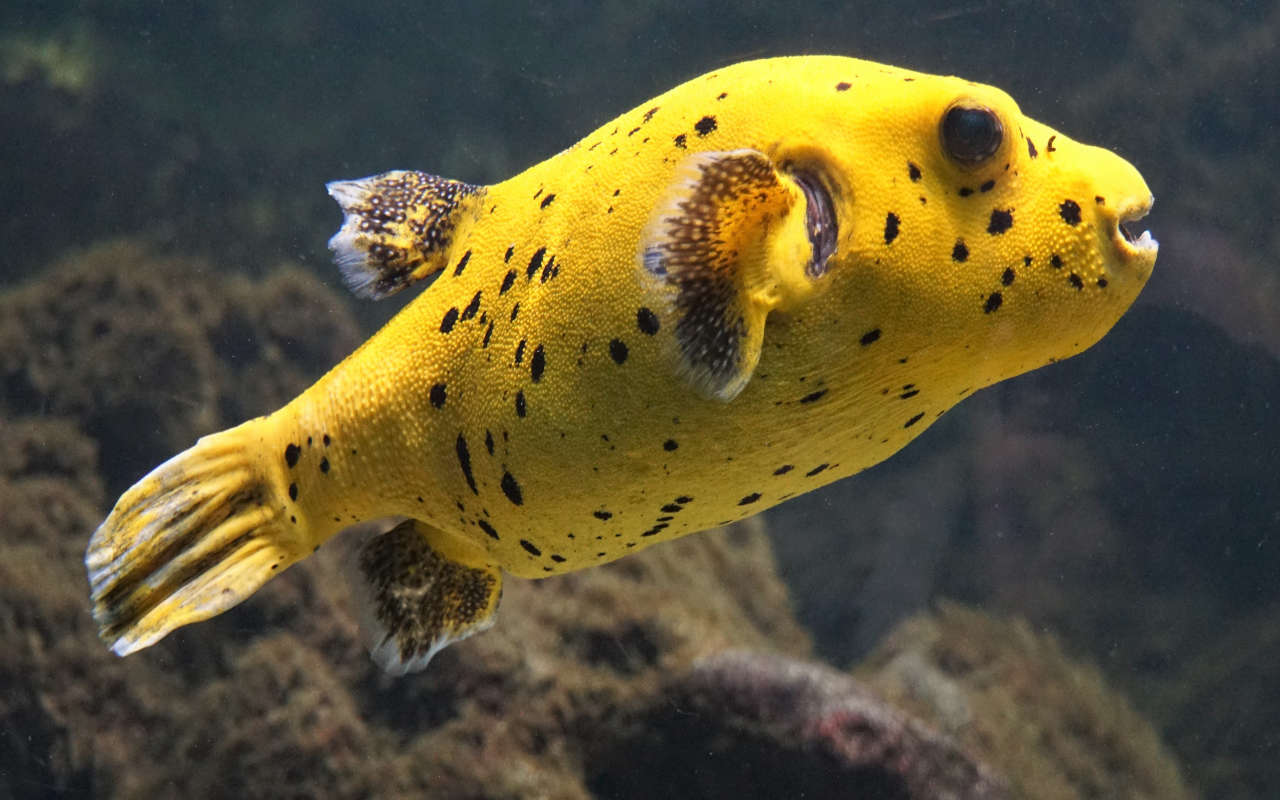 How do pufferfish reproduce?

Pelagic, or open-ocean, life stages are common in marine puffers. Spawning happens when males force females to the surface of the water or join females that are already present. The eggs are buoyant and round. After around four days, the eggs hatch. The fry are little, yet upon magnification, they exhibit a pufferfish-like form. They have a mouth and eyes that work, and they must eat within a few days. Brackish-water puffers may breed in bays like marine species, or in cases when they have traveled far enough upriver, they may breed more like freshwater species.

They're known as fugu in Japan, and they're a pricey but delectable feast. Only skilled and licensed fugu chefs prepare them. The majority of puffers reside in tropical and subtropical ocean waters, however several species can also be found in brackish and fresh water. Pollution, habitat loss, and overfishing have made certain pufferfish species vulnerable, but most populations are considered stable.

The majority of pufferfish species are deadly, and some are among the world's most poisonous vertebrates. Internal organs, such as the liver and sometimes the skin, in certain species contain tetrodotoxin and are highly toxic to most animals when eaten; however, the meat of some species is considered a delicacy in Japan (as, pronounced fugu), Korea (as, bok, or bogeo), and China (as, hétn) when prepared by specially trained chefs who know which parts are safe to eat and in what quantities. Other pufferfish species with harmless flesh, such as the Chesapeake Bay's northern puffer, Sphoeroides maculatus, are regarded delicacies in other parts of the world.

How deadly can the consumption of Fugu be?

Pufferfish fatality data are difficult to come by, but according to the World Health Organization and a National Geographic article, at least 50 people die each year from neurotoxins found in pufferfish livers, ovaries, testicles, intestines, and skin. Hundreds more become gravely ill and can only recover with prompt medical attention.

If served incorrectly, pufferfish can be fatal. Puffer poisoning is most commonly caused by consuming improperly prepared puffer soup, fugu chiri, or raw puffer meat, sashimi fugu. While chiri is far more likely to result in death, sashimi fugu frequently results in drunkenness, light-headedness, and lip numbness. Tetrodotoxin from pufferfish paralyzes the tongue and lips, causes dizziness and vomiting, and causes numbness and prickling all over the body, as well as a high heart rate, low blood pressure, and muscle paralysis. The toxin paralyzes the diaphragm muscle and prevents breathing in the individual who has consumed it.

What is tetrodotoxin and why is it poisonous?

Tetrodotoxin is an exceptionally potent poison (toxin) found mostly in the liver and sex organs (gonads) of some fish (order Tetraodontiformes), as well as in several amphibian, octopus, and shellfish species. When the meat and/or organs of the fish are incorrectly prepared and eaten, human toxicity occurs. Tetrodotoxin disrupts the passage of information from nerves to muscles, resulting in a progressive paralysis of the body's muscles. Tetrodotoxin poisoning is dangerous and can be lethal.

What are the signs & symptoms of pufferfish poisoning?

Tetrodotoxin poisoning can have a rapid or delayed onset (10 to 45 minutes) (generally within 3 to 6 hours but rarely longer). Death can happen as soon as 20 minutes after exposure or as late as 24 hours, although it usually happens within the first 4 to 8 hours. Patients/victims who survive acute intoxication within the first 24 hours usually recover completely without any lasting effects. Symptoms can last several days, and recovery can take several days.

Tetrodotoxin blocks sodium channels, which prevent impulses from being sent from neurons to muscles. This causes muscles, especially those in the respiratory system, to quickly weaken and paralyze, potentially leading to respiratory arrest and death. 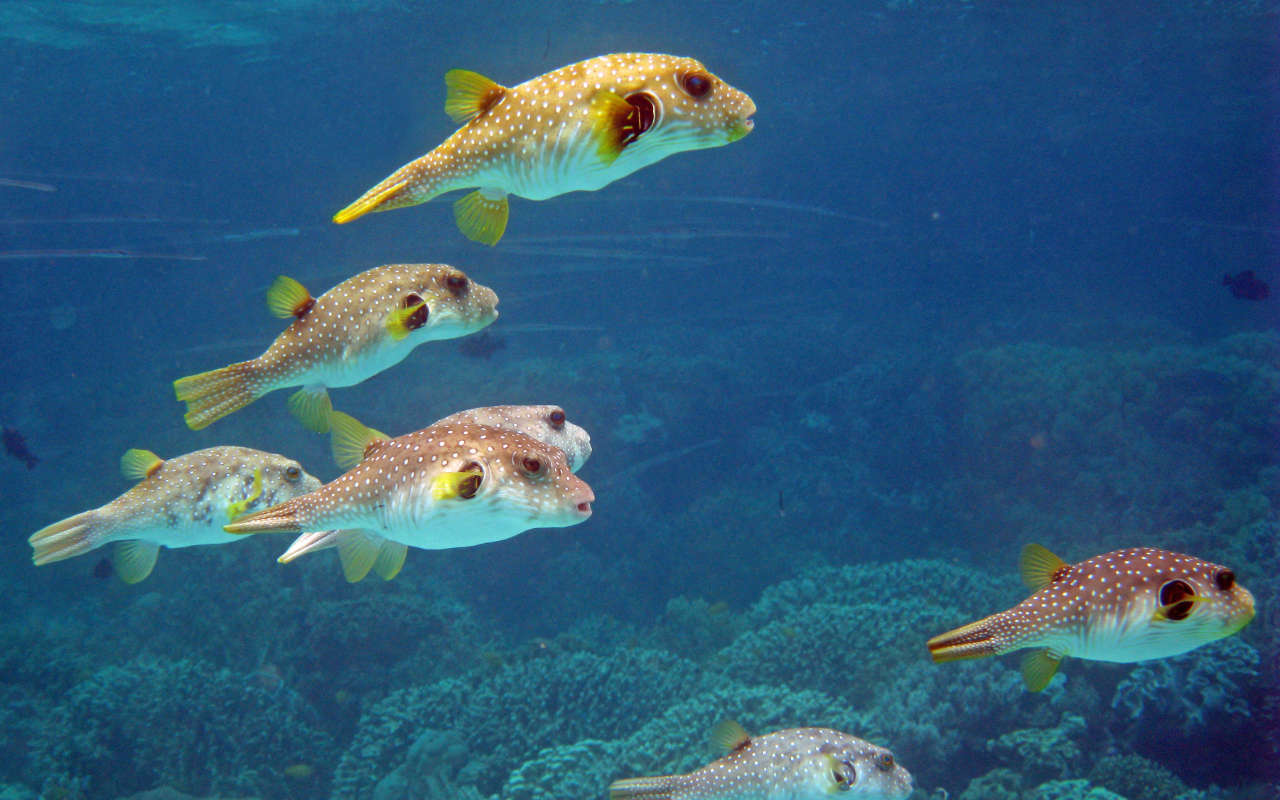 What happens when I ingest the pufferfish poison tetrodotoxin?

Is there a known antidote for the pufferfish poison?

For tetrodotoxin poisoning, there is no antidote.

How do you treat pufferfish poisoning?

After the airway has been secured, stomach pumping (gastric lavage) may be undertaken if the patient/victim can be quickly transported to an emergency department following decontamination. Only after administration of a life-threatening dose of tetrodotoxin, and only if it can be done quickly after ingestion, is gastric lavage indicated (generally within 1 hour). The possibility of worsening harm to the gastrointestinal (GI) tract lining must be recognized. The patient/cardiac victim's function should be monitored, and low blood pressure (hypotension), aberrant heart rhythms (dysrhythmias), and impaired respiratory function should also be assessed (respiratory depression).